Modelling Moon Phases : Fizzics Education
View cart “Be Amazing! How to teach science, the way primary kids love.” has been added to your cart.
Skip to content

Push the nail into the ping pong ball. This gives some distance between your hand and the ball so that you can see the shadow effect better.

Turn the lamp on and face it toward the Earth model (or the ball you’re using to represent the Earth). Place the ping pong ball in between the lamp and the Earth.

You’ll notice how the side of the ping pong ball facing toward the Earth has a shadow cast across it. This is what we call ‘New Moon’.

This position is known as first quarter. Once the Moon travels around to the other side of the Earth, we would call this third quarter.

If you were looking up to the Moon from the Earth in this position you would see the Moon completely illuminated. This position is called a full moon.

Moonlight is simply sunlight reflected off the Moon to the Earth. The more that the Moon’s surface is illuminated by Sun, the more of the Moon we get to see! The changes in the phases of the moon is due to the changing position of the Moon as it orbits the Earth. Weirdly, it takes 27 days, 7 hours & 43 minutes for the moon to complete an orbit around the Earth however the cycle of the 8 moon phases take 29.5 days due to changes in the relative position of the Sun, Moon and the Earth.

There are 8 phases of the Moon

You can also model the phases of the Moon using oreo cookies! 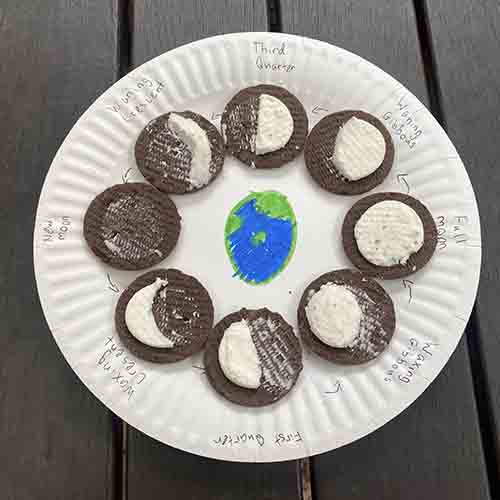