Take your first reading in the morning, at least an hour before midday. Mark the tip of the shadow with a small object, such as a pebble, or a distinct scratch in the ground. Try to make the mark as small as possible so as to pinpoint the shadow’s tip.

Use a length of string to exactly measure the length as the first shadow you recorded. Keep checking shadow’s length every 10-20 minutes. You will find that the shadow will continue to shrink as the time approaches midday when shadows are at their shortest.

The shadow will begin to lengthen after midday. When the shadow grows to exactly the same length as your string from the first measurement, mark the spot.

Draw a straight line connecting the first and second marks as above. This is your east-west line.

If you stand with the first mark on your left and the second on your right, you will be facing in the approximate direction of true north.

For an exact reading, your two marks need to be made at exact intervals before and after noon where you are, which means when the sun is at its highest point in the sky. 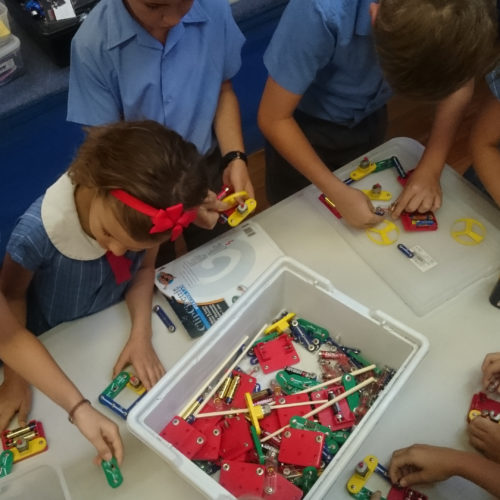 Magnetic north is found by your compass, which is attracted to the magnetic field
surrounding the Earth itself. True north is the direction of the Earth’s North Pole.

The difference between magnetic north and geographic north is called magnetic declination, with the difference varying between different places on the planet.

The shadow tip method works by knowing that the Sun travels across the sky from East to West everyday, and that at some point in time the Sun has to reach it’s highest point of travel , i.e. midday. Midday time is different at every point on the Earth’s surface, so finding true north requires you to take a measurement at the location in which you are standing.

Learning about the Earth, Sun & Moon? We’ve got your Night and Day unit covered!
Get in touch with FizzicsEd to find out how we can work with your class.