Get roving video conference robots at your school or museum! : Fizzics Education
Skip to content

Get roving video conference robots at your school or museum!

There has been much talk around National Museum’s video conferencing robot. 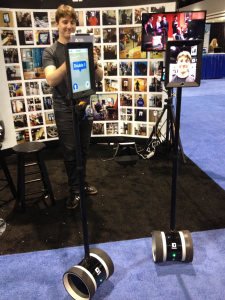 Developed in collaboration with the CSIRO and the Department of Broadband, Communications and the Digital Economy, the telepresence robot roving the NMA’s floors has allowed multiple remote schools and libraries to simultaneously connect to an onsite educator to ask questions as well as explore the exhibits themselves using the panoramic cameras that create a 360 degree view with zooming capability. The only issue is that whilst the technology is very exciting the associated price tag makes it difficult for other sites to attain easily.

There are low cost options that have been roaming educational halls and hospitals for years and represent an exciting way to scale the concept for Australian needs. During my Churchill Fellowship tour I came across a couple of these solutions and was very impressed with how easy they are to operate and the attainable price for implementation. The New York Hall of Science uses a VGO robot as a way for remote learners to interact with summer science camps occurring within the galleries. The learner is able to log onto the robot and control its movement, effectively acting as an autonomous student. There are other models available too; a popular one in schools is the one from Double Robotics that is effectively an iPadTM rolling on a small version of a SegwayTM. In both cases these VC robots have found uses in hospital systems for bed ridden patients to provide virtual mobility as well as in schools for remote students to participate in lessons. The remote site simply downloads an app and controls the robot from their location. The result is the ability of a remote student to move around the school or similar and interact with classes… not unlike ‘Shelbot’ seen in the Big Bang Theory comedy series!

Schools have been using these systems to allow sick kids still attend classes, even for students to present their oral presentations to their class whilst on an excursion. The technology also be used as a way of giving visitors a virtual tour of your site before they even step foot on your grounds – as a former boarding school student I reckon this also presents an interesting possibility for families looking to get an idea of where they are sending their kids! Regardless of how you look at it, these robots and other similar products add yet another dimension to an already exciting field for distance education!

10 Ideas for teaching science this term