One soft drink can (the smaller 200mL cans work best)

One human volunteer with hair!

Make sure the can is empty and dry

Blow up the balloon.

Rub the balloon vigorously on the head of your volunteer, until their hair starts to stands on end.

Lie the soft drink can on a flat surface, on its side.

Hold the part of the balloon that was touching your volunteer’s head close to the soft drink can, but do not touch it. You should see it roll towards the balloon, seemingly by itself!

Try getting the can to roll and then reverse the direction of motion without touching it.

All static electricity experiments work better on dry days. The greater humidity draws charge away from the objects that you’re using.

Everything in the universe is made of atoms: tiny particles that have positively charged parts, protons, and negatively charged parts, electrons, plus some neutral parts, neutrons. Please note that the real structure of the atom is outside the scope of this webpage; if you want a quick high school description of sub-atomic particles check out the Standard Model description on the CERN.

When we put the charged up balloon near the soft drink can, there are two results. 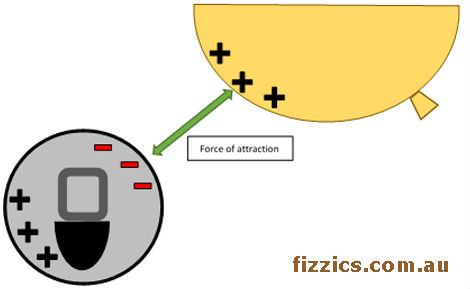 The charge we create in the balloon is called static electricity. It’s the same charge that gives us a zap on a slide, swing set or trampoline. It’s also the same charge that causes massive lightning bolts. Instead of a balloon and hair rubbing against each other, in a cloud. The tiny particles of ice bump into each other and cause a build-up of charge. When there’s enough charge in the cloud, it’s unleashed as a lightning bolt. A moderate thunderstorm can produce more than 700 megawatts of power, which is more than any of the generators at Loy Yang power station in Gippsland, Victoria.